Department scientists engineer solutions to a broad range of major biomedical challenges that include:

Examples of department research and methods in this area include

Building a solution for kidney failure 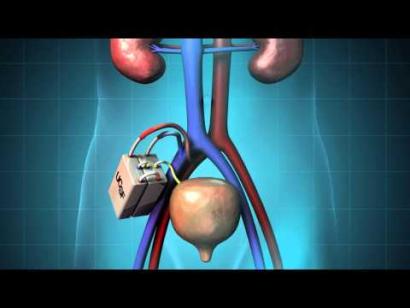 Video describing The Kidney Project based in the department.

Department scientists direct a multi-institution effort, The Kidney Project, to develop a surgically implantable, full-function bioartificial kidney—a device the size of a coffee cup, powered by the body’s own blood pressure. The project employs microelectromechanical systems and nanotechnology to create components such as robust silicon nanopore filters that mimic natural kidney structure for high-efficiency toxin clearance. It also uses tissue engineering to build a miniature bioreactor in which immuno-isolated human-derived renal cells perform key functions, such as reabsorption of water and salts.

Drug delivery for a leading cause of blindness

Drug treatment for the wet form of age-related macular degeneration (AMD) can block the overgrowth of leaking blood vessels under the retina, which cause progressive central vision loss. But regular medication delivery to the back of the eye via injection is both daunting to patients and pharmacologically inefficient, due to rapid drug clearance and protective tissue barriers to permeation.

Researchers here are adapting photo-etching fabrication techniques from the microchip industry to create thin-film and planar microdevices (dimensions in millionths of meters) with protective medication reservoirs and nanopores (measured in billionths of meters) for insertion in the back of the eye to deliver sustained doses of drug across protective retinal epithelial tissues over the course of several months. 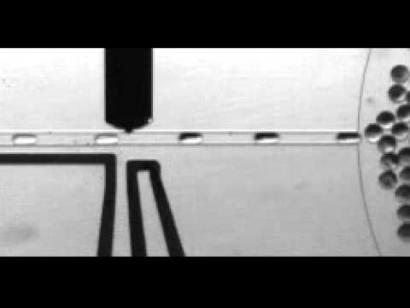 A slow-motion video captures picoinjection, in which about 10 picoliters (10 trillionths of a liter) of chemical reagent (such as might be used to amplify DNA) is added to microdroplets of water flowing at a rate of about 1,000 per second.

In cancers, individual malignant cells differ in their genetic expression, and thus their ability to evade the immune system, increase blood supply for tumor growth, or respond to chemotherapy. Analyzing such differences is a key to understanding cancers and to targeting treatments, but sequencing a millions cells’ gene activity one-by-one would take centuries.

Department scientists are using droplet-based microfluidics in which microdroplets of water (one-tenth the diameter of a human hair) flowing in an oil emulsion at a rate of about 1,000 per second are given robotic picoinjections (trillionths of liters) of reagents for massively-parallel ultrahigh-throughput single-cell sequencing. Inside each microdroplet, a cell is lysed and assayed for gene expression (real-time polymerase chain reaction) that can be laser-detected, quantified, and sorted for further analysis of cancer cell sub-types. Potentially this would allow for the analysis, in just a few days, of a sample that contained one million cells.

The delivery of drug therapies to tumor cells can be limited both by biologic barriers, such as extracellular tumor matrices and by some tumors’ metastatic nature that spreads malignant cells to other parts of the body.

Researchers here are using cellular and liposome engineering to generate and modify M-1 (so-called “killer”) macrophage cells, which are immune system cells present in all tissues and known for homing in on cancer cells. The goal is to reproduce a patient’s own immune cells in the lab, then modify them via insertions of genes or lipid nanoparticles (liposomes) that enhance their anti-tumor effects.

In testing against a mouse model of breast cancer, such cells are being armed both with drugs and signaling proteins aimed at also converting into M-1 cancer killers another macrophage phenotype (M-2) that aids in tissue repair but can reside in tumors and enable their growth. 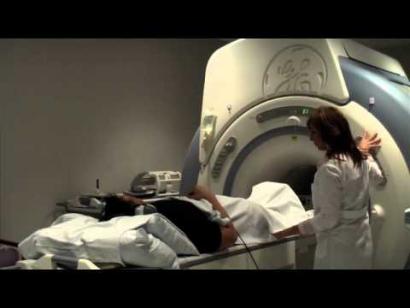 Video details combined use of MRI and a specially labeled metabolite to evaluate the aggressiveness of prostate cancer tumors.

Rapid diagnosis of the stages of a cancer, differentiation of sub-types, and analysis of the cancer's response to therapy are vital to understanding the disease and tailoring effective treatments to individual patients.

Department scientists are developing magnetic resonance imaging (MRI) techniques to obtain such cancer biomarkers. They are combining the design and use of specialized instrumentation and quantitative analysis software with the injection of a specially labeled metabolite (hyperpolarized carbon-13 pyruvate) to detect the substance’s uptake and metabolism by tumors. This approach is being used to experimentally evaluate the aggressiveness of prostate cancer tumors in order to guide treatment decisions and to develop methods for more rapidly determining and monitoring therapy efficacy and disease status of the most common brain malignancies, gliomas, which can undergo ambiguous changes in shape in conventional imaging.

There are nearly 1 million heart attacks in the United States each year. Survivor recovery can be limited by the development of dense, debilitating cardiac scar tissue within days following a myocardial infraction. This often leads to a stiffing and thinning of the affected ventricular muscle wall, which diminishes pumping efficiency and can lead to heart failure.

Department bioengineers are developing and testing a therapeutic-materials strategy that injects the infarction site with microstructures—hundreds of thousands of polymer rods or cubes fabricated using photolithography with dimensions measuring millionths of meters. Analyses of 3D cell cultures found the approach apparently works to stop the damaged tissue’s pathologic response by stabilizing the microenvironment. The presence of microstructures reduces mechanical stress on fibroblast repair cells such that they do not overproduce function-inhibiting collagen and excess extra-cellular matrix proteins.

Make a gift
Science is the foun­da­tion of the School of Pharmacy’s pi­o­neer­ing re­search, in­di­vid­ua­lized pa­tient care, and un­par­al­leled PharmD and PhD ed­u­ca­tion pro­grams.
© 2002–2021 The Regents of the University of California